The middle Rogue River towns and waysides reflect a kin-ship with the mighty Rogue River. Parks, trails, restaurants, lodges and motels all are reflective of the rivers moods. In the fall the colorful fall foliage with the beautiful waters winding to the sea can be breath taking.

A drive through the Applegate Valley following the Applegate to Jacksonville, a old west town with lots of shops or Applegate Lake with a stop at Cantrell Buckley Park is a pleasant experience.

The middle Rogue’s attractions are wonderful Parks like Josephine County’s Indian Mary or the Oregon Parks Departments Valley of the Rogue State Park. The Oregon Caves National Monument near Cave Junction is awe-inspiring.

After falling out of Crater Lake National Park at over 6000 foot in elevation to just above 1000ft.in elevation in the middle section of the river near Grants Pass and Rogue River. The middle section of the Rogue River is known for being family freindly with warmer flows and mild to moderate White Water Rafting a great choice for the novice rafter or those interested in a relaxing scenic rafting or drift boat trip. You may want to chose to take a Whitewater Tour Boat ride out of Grants Pass or Rogue River with lunch or dinner stops at a Rogue River lodge.

The middle section of the Rogue River offers spectacular river canyon scenery,  such as found in Taylor Creek Canyon or Hellgate Canyons where True Grit was filmed with John Wayne and Katherine Hepburn.

The water temperatures in middle section of the Rogue River are ideal for summer swimming and White Water Rafting reaching above 70 degrees in summer months.

The Rogue River from below Medford, Oregon to Graves Creek has some very nice Rogue River Whitewater Rafting opportunities. Rogue River Rafting headquarters is found just north and west of Grants Pass (on I-5) at Merlin and Galice.

The middle section of the Rogue River offers spectacular river canyon scenery,  such as found in Taylor Creek Canyon or Hellgate Canyons where True Grit was filmed with John Wayne and Katherine Hepburn.

A combination of warm summer temperatures,  70 degree waters in this area of the Rogue River to make scenic and safe family rafting outings. 1/2 day and full day trips with rafting equipment rentals and shuttles available in Merlin and Galice.

The middle Rogue River is famous for a very large return of Fall Chinook or Kings and fishing is excellent in here in late July to October. (See our Rogue River Fall King Salmon fishing page for more information.)

Oregon’s largest Winter Steelhead run is on the Rogue River and over 17,000 Winter Steelhead enter the Applegate River a tributary stream near Grants Pass alone every year!  Jan – Feb – March.

A popular stage coach stop in the 1860s, the city became Grants Pass in honor of U.S. General Grant’s success at Vicksburg. The apostrophe was removed from “Grants” at the turn of the 20th century. Grant Pass refers to itself as river city because of its location on the banks of the Rogue River and the Rogue’s ingrained importance to the community both culturally and financially.

The city sits on the banks of its namesake. Calaveras County has its celebrated frog jump. Rogue River has the rooster crow. Located just up river from Grants Pass on I-5, Rogue River is a small river town. Just south of Rogue River is Valley of the Rogue State park with a large RV Park and Campground on the river. 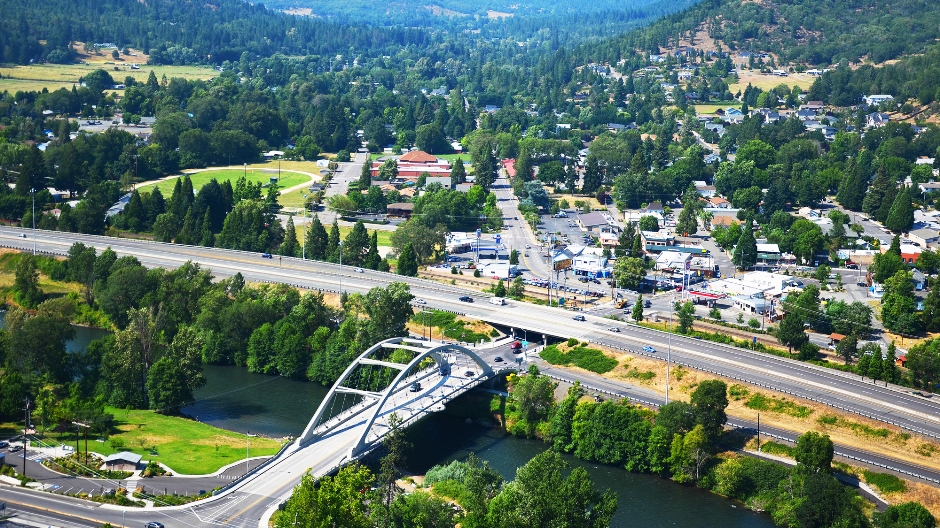 In the early 1860s, a large gold nugget was found northeast of the present city site. Soon, the entire area was swarming with miners and merchants with dreams of striking it rich.

Visit the Del Rio Vineyard with hundreds of acres of grapes with Wine Tasting rooms at the 1864 Rock Point Hotel.

Oregon Caves National Monument is only 480 ac. but an amazing place. Encompassing an old-growth forest that includa a Douglas-fir tree with the widest known girth in Oregon. Hiking trails access the forest. The marble caves created by natural forces over 100,000’s of years are found in one the world’s most diverse geologic realms. The Southern High Cascade Mountains boarder Rogue River Country on the East. Ranging from 4500 ft to 10,000 ft. in
Read More

Brookings Oregon and the...

Brookings Oregon and the Chetco River a small seaport town is located just 7 miles north of the California / Oregon boarder.  With a
Read More

Winchester Bay, Or. - Umpqua River and Reedsport just a couple of miles upriver on Hwy 101 both reflect great
Read More